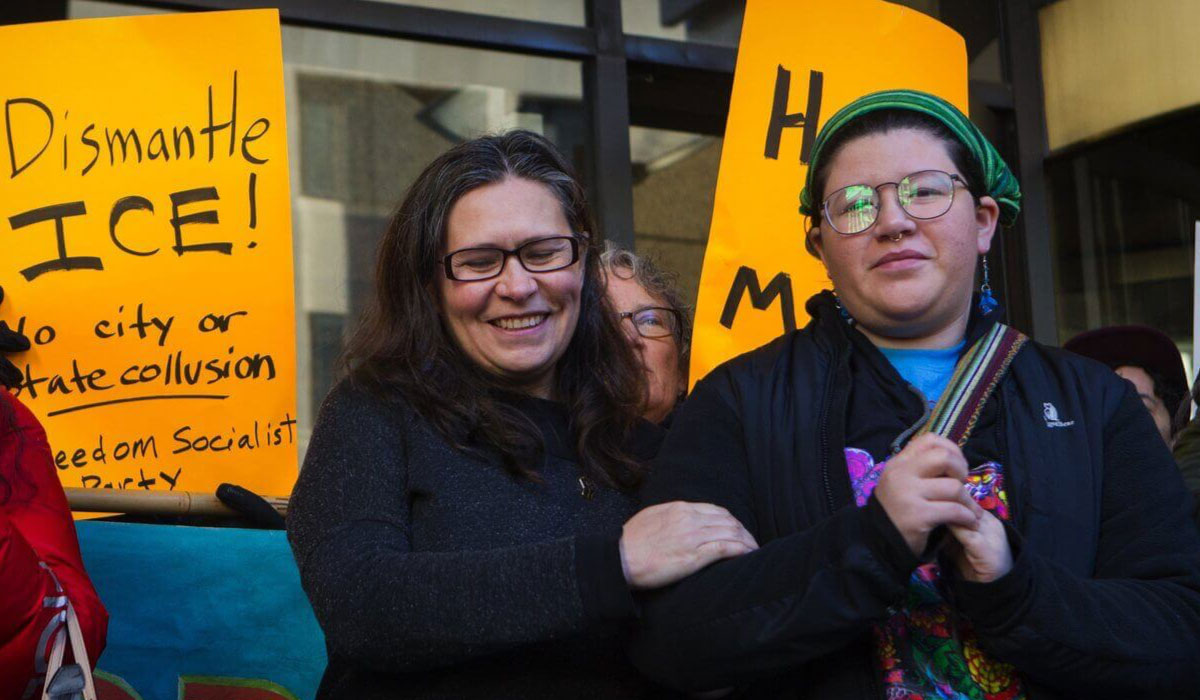 “I have accompanied many people to their check-ins and court dates with ICE. On Thursday, I will face ICE myself for the first time,” stated Mora-Villalpando. “ICE is going after me and my family because they want to silence my work, which has exposed their cruel, inhumane detention and deportation policies. I will continue this fight because I am one of millions facing ICE’s abuses, and they must be stopped,” she concluded.

Mora-Villalpando leads Northwest Detention Center Resistance, an organization that was co-founded when immigrants held at the Northwest Detention Center began a series of hunger strikes in 2014 protesting their inhumane treatment. The group’s effective organizing has brought to light the abuses faced by immigrants in the now-infamous Tacoma facility. The Motion to Terminate filed with the Seattle Immigration Court alleges that Mora-Villalpando is being singled out for deportation by ICE precisely because of her years of political activity against the agency. The Immigration Judge has the authority to terminate Mora-Villalpando deportation proceedings due to this unlawful targeting of her political speech.

Immigrant rights organizers point to the attack on Mora-Villalpando as a sign that ICE has gone beyond seeking to enforce the immigration laws. Tania Unzueta of Mijente, a national Latinx organization observed, “By purposely targeting people such as Maru who are organizing against the Trump administration’s racially-motivated deportation agenda, ICE has officially made the leap into a political repression agency.”

Elizabeth Simpson, a member of Mora-Villalpando’s legal team and attorney with the National Immigration Project of the National Lawyers Guild,  added, “We expect government officials to discharge their duties in a fair and non-discriminatory way. By targeting Maru because of her political activism, ICE is directly contravening that trust, and threatening our fundamental right to free speech and assembly.”  Devin Theriot-Orr, also a member of the legal team, stated, “ICE’s actions in Maru’s case are a transparent attempt to stifle dissent by targeting specific political viewpoints for retaliatory action.”

Mora-Villalpando has lived in the U.S. for over 25 years. She lives with her daughter, Josefina, a college student and U.S. citizen, near Seattle, Washington. In addition to working with NWDC Resistance she is a founding member of the national Latinx organization, Mijente.

NWDC Resistance is a volunteer community group that emerged to fight deportations in 2014 at the now-infamous Northwest Detention Center in Tacoma, WA. NWDC Resistance supports people detained who organized hunger strikes asking for a halt to all deportations and better treatment and conditions.

The National Immigration Project of the National Lawyers Guild is a national non-profit organization that provides technical assistance and support to community-based immigrant organizations, legal practitioners, and all advocates seeking and working to advance the rights of noncitizens. For 47 years, NIPNLG has promoted justice and equality of treatment in all areas of immigration law, the criminal justice system, and policies related to immigration.