We are excited to announce the launch of La Vida Local, a new initiative to incubate sin el estado (without the state) work within our Mijente membership! 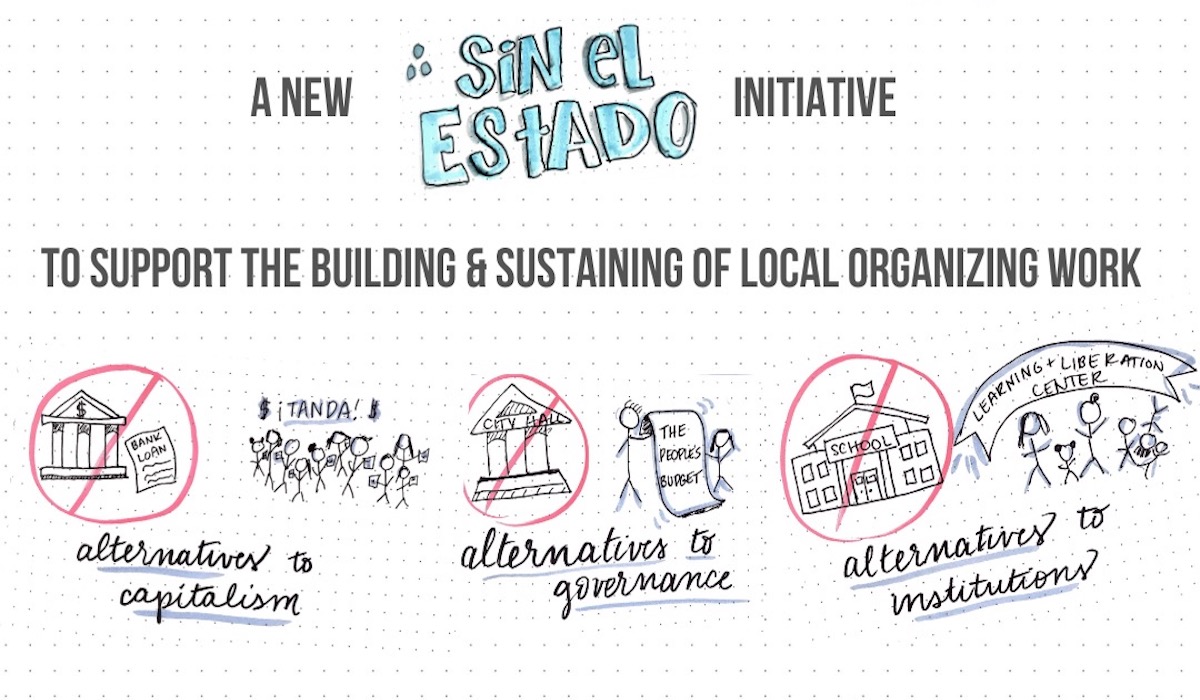 We are excited to announce the launch of La Vida Local, a new initiative to incubate sin el estado (without the state) work within our Mijente membership!

What is Sin El Estado (Without the State) Work?

“Sin El Estado” takes the work of resistance and moves it one step further into the realm of imagination and transformation: as gente living under state capitalism, white supremacy, and heteropatriarchy, we are often asked to define ours our existence in relation to the dominant structure. Often we find ourselves in what we can call a “1st space.” That is, living under the conditions mentioned above. As organizers, activists, and resistors, we tend to also live in a “2nd space” where we are forced to react en contra or against these conditions. “Sin el estado” work offers a “third space” that allows us to be more than passive participants of state capitalism or as victims/people in struggle against. This frees people up to explore other, liberatory ways of existing as individuals and communities–right here, and right now.

-New ways of carrying out “contra el estado” work–such as direct actions and organizing tactics that show us a version of what the new world we are fighting for could look like and how it would function.

-Long-term organizers in Jackson, MS have taught a lot of us what is possible when you elect your candidate but continue to carry out peoples’ assemblies and caucuses to discuss important community issues–not just to make sure the mayor checked the box of receiving input, but because the mayor knows the people will hold him accountable during his term, not just every four years at the ballot box.

Here are some examples of sin el estado work across various sectors:

As more of our gente gets elected to office, we must ask each other: what are the mechanisms, structures, and behaviors that allow us to co-govern and do not replicate the dominant culture of governance? As activists and organizers, we often get trained in differentiating from the mainstream, in building power to win against. However, to be generative while in power, to implement different mechanisms for community input and manifestation requires different muscles altogether. Some of these strategies and tactics are simple interventions around authentic community leadership development, meeting facilitation, and building aptitude for productive conflict and principled struggle.

Public institutions–such as schools, hospitals, libraries, and public transit–if they are even adequate, can often perpetuate the dominant culture’s narrative. We must experiment with “third space” projects that attempt to replace these institutions in our lives altogether.

The ways in which we are beholden to capital keeps us tied up in innumerable ways. From jobs that don’t pay enough or don’t schedule enough hours, to lopsided profits for billionaires who do nothing for us. From the financial/banking/credit system to supply chains that poison the environment, most of us are affected by capital’s grip on our communities. Experimenting with alternative financial institutions can create spaces away from our mainstream economic system. Some of these are informal and/or quite distanced from our economic system, like tandas or people bartering bread for eggs in a neighborhood, and some of them are heavily formalized and have high proximity to capitalist economies, like the food co-op you don’t even realize is a co-op that stocks all kinds of major national brands.

It’s not just about creating opportunities for sharing or alternatives to oppressive structures, although that is certainly part of why we do the work. Dominant culture is constantly shaping and reshaping our brains into conflict-averse, self-blaming, anxious beliefs and behaviors that make us poorly equipped for winning and for being generative about what happens once we’ve won battles for power. Sin el estado projects can help individuals and communities get a taste for radical democracy, pro-conflict, confidence-boosting, trust-building new beliefs and behaviors that can help us get the goods and keep them.

Why is Mijente tackling this?

Because it’s part of our framework! However, in US organizing spaces, it’s often the most ignored work. Sin el estado work  actually builds skills that are necessary for the battles ahead. Latinx people can be among the lowest-paid workers in the US. We can organize for greater wages but we can also just make our own way. We can hustle. In particular, our undocumented gente are often excluded from mainstream democratic processes (voting, collective bargaining, etc.) Lastly, we do this work because our people often have few, if any, safety nets to just try some shit and take risks.

We know our gente has what it takes to experiment and try new things out. We’re excited to provide an opportunity to seed new work and see what grows!

Are you a Mijente member and have an idea for a project? Click here to apply!

If you’re not a member yet, make it official at mijente.net/join!