Get to know the incredible field organizers, canvassers, and volunteers in North Carolina who are throwing down hard to register Latinxs to vote. Next up: Vanessa! 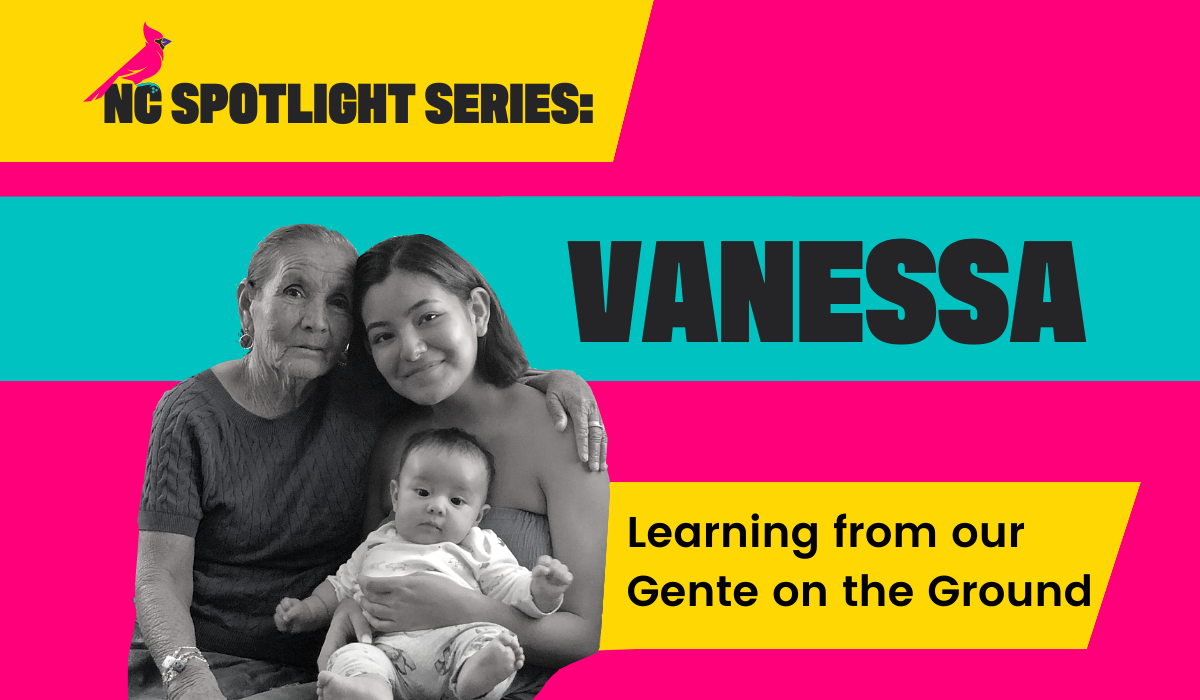 Meet Vanessa - one of our college NC field organizers living in Winston-Salem. Her family came to North Carolina when she was six years old from Mexico, and she is going into her second year of college this fall. In the midst of a pandemic, Vanessa has dedicated her time to educating Latinxs on Black Lives Matter and training them to reach out to our gente during weekly phone bank calls.

How did you get involved in organizing?

My whole life I was aware that I couldn’t always do the same things as my coworkers and friends, but in high school I started to learn a more about the systems and all the politics that affected me, as an undocumented Latina. I had  trouble thinking about my next steps after graduating. I actually ended up not applying to any colleges at all. I was so scared of the rejection - of applying and not being accepted because of my status. There was so much fear in my community and I'm not the only one -- there are many of us that are forced to put something on hold out of the fear of being deported or having a family member deported. It scared me, but that fear turned into a lot of power. Today, I don’t want anyone who looks like me or has my background to feel like they can’t succeed when they’ve been fighting for it their entire lives.

What has been one of your favorite parts about working on this campaign?

Meeting other Latinxs folks who were not even aware that safe and political spaces exist like this for our people. I see looks on the faces of my teammates and know we are all experiencing something new: for the very first time we feel 100% welcome and safe in a space where we get to talk about political issues impacting our community. I now know I have so much power and that there are so many things I can do for myself and my community. I’m ready. I'm pumped and excited.

I thought it was going to take a lot more to get our gente, but they have been waiting for this for such a long time, they just didn’t know they could have these interactions. The fact that I’m part of reaching so many folks with this campaign - it’s heartwarming and gives me so much hope.

Why is organizing with Latinx spaces important to you?

Siembra NC was my first time experiencing a Latinxs political organization that is also a safe place for our gente. I had never been in that kind of space before. I had never seen our people, people who look like me, who speak the way I speak, actually going out and demanding political change for our gente. Being undocumented, you can feel like there’s only so many ways that we can help. I became a member of Mijente not only because it's one of the few organizations that's so inclusive of everyone. I joined because it’s made me feel like I belong. It’s not just “oh you’re a member” to me it’s more like I’m part of the family. I’m allowed to be in this space - to say what I want to say and I won’t be judged or turned away. I’m going to be welcomed, loved and held. And we build power together, so it’s overall an incredible, incredible home.

Why should all Latinxs get involved in voter registration work - con y sin papeles?

So when it comes to voter registration, we know that we don’t need papeles we don’t need to be documented to register someone who is eligible to vote. We can work together to go out into our communities that people aren’t going into and register our folks to vote. It doesn't take papeles to talk to someone, encourage them and let them know that they’re a part of a really big community and register them to vote. Maybe some of us can't physically go out and vote - but our voice is so strong. And it’s actually powerful to speak to our people about the importance of registering to vote. Not just because it’s their right as a citizen but because it’s going to better everyone in our community. That alone can make so much more of an impact in the long term. You don’t need papels to make this big change and voter registration is one of the biggest ways that we can get our Latinx community to build that power together.

Why do you want to register our gente to vote in NC?

There's 200k in NC that are Latinx and eligible to vote. That number alone can not only change the way that this system and politicians see us - right now they don’t even recognize us. It’s our change to say “We’ve been here”. These 200k voices aren’t just representing themselves. Their vote is representing hundreds of thousands more people -  because there are many other NC Latinxs who aren't able to vote. That means the world to a lot of us. It can open the door for better healthcare for our people, better living situations, more job opportunities. That alone can change the life of my parents and my family - it would allow me to feel like I’m being represented and that there is a fighting chance for us.

We’re going to not only show them that aqui estamos y no nos vamos  - we’re going to push them to make this political system work for us and not just for them.